This is a PSA of sorts for all the customers out there. Sure, you can do these things, but I don’t know why you would ever want to. Here are the top 10 things customers do that absolutely infuriate auto mechanics.

1. Arguing on price.
Mechanics get a bad rap. A few bad apples out there and all of a sudden people think they’re getting scammed. Well, just because you don’t know what’s under the hood of your car doesn’t mean a mechanic is trying to scam you. Arguing on price really riles up a mechanic since most of them are very trustworthy, honest people. If you really think you’re getting ripped off, just say “Thanks, but I’ll hold off on that for now,” and go somewhere else.
2. Touching their stuff.
Would you go to a doctor’s office, and start picking up their tools and playing with them? An auto shop is like an ER of sorts, and things have to remain in order for there to be productivity. So don’t enter their domain and start touching their stuff. Picking up a mechanic’s tools will create some serious wrath.
3. Calling 1,000 times.
It’ll be done when they said it will be done. Calling over and over won’t make it move faster, and it sure as heck won’t help you win any friends at the auto shop. Usually you’re not the only person who needs their car worked on, so hang tight, and have a little empathy.
4. Customers working on their own cars.
Don’t, just don’t. Unless it’s something that you absolutely know how to do, don’t try to work on your own car. Maybe this doesn’t really frustrate mechanics, but it can definitely make the job tougher. If you screw something up, it could mean paying a lot more money for you, and a lot more frustration for the mechanic. Just take it in to the shop.
5. Waltzing around the shop.
Usually there is a designated area for customers to stand in, which is both for the customers’ safety and to keep the work area only for people who are hyper-aware of what’s going on. Moving around the shop can create a headache for the workers there trying to do their job, and a literal headache for you if you bang your head into an exposed brake rotor.
6. Saying it’s something else.
Bringing your car into a mechanic and then telling them that they’re wrong is one of the strangest and most frustrating things you can do to a mechanic. If you went to a doctor and they told you that you had a sprained ankle and you told them it was broken, they’d probably tell you to get out of their office and enjoy your pain. It doesn’t matter what your “cousin’s boyfriend who’s a mechanic” told you. If he’s a mechanic, then bring it to him, and not somewhere else.
7. Coming in at 4:59 p.m.
Okay, so sometimes this is unavoidable, but everyone just wants to go home at the end of a long day. If you have the opportunity, try and go earlier in the day to avoid bringing your car in right at the end of the day. You probably won’t get it back until the next day anyways, and the mechanic might be upset that they have to stay longer.
8. Explaining how your old mechanic was so great.
Okay, so maybe this one is a little bit over the top. But honestly, talking about how awesome your old mechanic back home was isn’t going to win you any fans. There’s also no positive gain from doing it. Instead, try to establish just as good a relationship with your new mechanic as your old one.
9. Telling them what to do.
This one is in the same vein as telling them what your cousin’s boyfriend said what wrong. It’s one thing to talk shop if you know your stuff, but it’s another to be overbearing and presumptuous. This stuff can really upset a mechanic, so just let them do their job, and I’m sure things will be alright. After all, you brought it to them so that they do the work for you, right?
10. Getting mad over a delay.
Delays happen, and so long as the mechanic lets you know about it, and it’s for a legitimate reason, don’t be angry. I know it can be frustrating for a customer, but mechanics are doing what they can to work on your car as fast as possible. So when you get mad, they might get mad too. 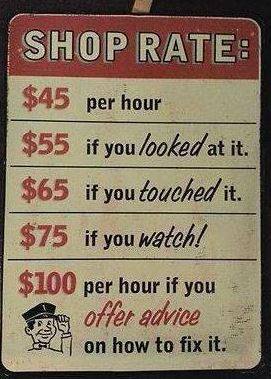 Learn WHY Winworks is the preferred Shop management Software!

Click Below To Read or Write us a Review on Capterra